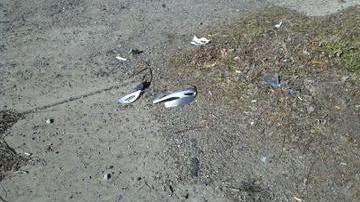 SOUTH BEND, Ind. - The driver involved in a fatal car/pedestrian accident Sunday morning has been identified.

The St. Joseph County Sheriff's Office told ABC 57 News that Amy Miller, 22 of South Bend was behind the wheel of the car that struck and killed 62-year-old Steven Carey of South Bend.

S.R. 23 from Douglas to Cleveland Road was closed for two hours as a result of the crash, reopening at 1 p.m.

The bicyclist was thrown from the bike hitting the windshield.

Witnesses told ABC 57 News that there was an indentation in the windshield and the roof off the car where the victim's body and head hit.

His helmet was shattered on impact, pieces of his helmet are still laying on the side of the road right now.

Miller wasn't injured in the crash, however, she was transported to Memorial Hospital for a standard blood test. Blood tests are required for the driver involved in a fatal crash.

The make/model of her car was not included in the press release. Those on the scene described it as a small compact car.

The Sheriff's Office said that neither drugs or alcohol appear to be a factor in the crash.

You can see a report from earlier from the scene of the crash on UStream by clicking here.