Driver killed in collision with semi 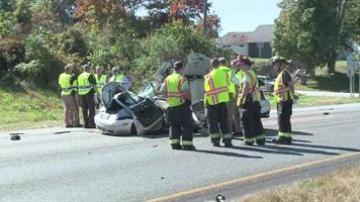 ST. JOSEPH COUNTY, Ind. -- One person was killed in an accident involving a car and a semi at State Road 2 and County Line Road in St. Joseph County Tuesday afternoon.

Witnesses say the driver of a Volkswagen was headed north on County Line Road when he went through a stop sign and a semi crashed into the car.

"It just looks like he was doing 60 plus. He was going really fast and he just went right underneath the semi truck. The semi ran him over," Jerry Callahan said.

They say the semi driver stepped on the brakes hard, but couldn't stop in time.

The car ended up under the wheels of the semi.

"Unfortunately when he entered into the roadway, he went underneath the trailer of the semi. The back wheels are what caught him and then the semi rolled over the top of the car," said Sheriff Michael Grzegorek of the St Joseph County Police.

Witnesses on the scene pulled out hand tools and rushed to try to pull the surviving passenger from the car.

His passenger was taken the hospital.

Grzegorek says it is an example of how important it is for drivers to be aware of their surroundings.

"You have to be very, very careful when you’re traveling the roadways and watching your speed obviously," said Grzegorek.