Drivers asked to use caution near snow plows 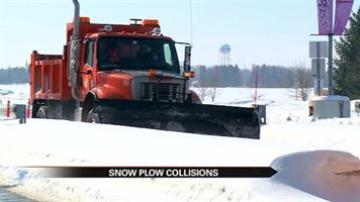 The record breaking snowfall this winter means snow plow drivers have spent a record number of hours on the toll road this winter. So far this year, five plow trucks have been hit. The numbers aren't higher than last year, but plow drivers want that number to be zero.

On the toll road there are semis, cars, trucks and snow plows sharing the road.

Despite all the warnings to slow down, drivers keep crashing into the plow trucks.

"We had one a couple weeks ago at 62 mile post. And most of our accidents are rear-end collisions," said Pat Condon, snow plow driver and Manager of Maintenance for the Indiana Toll Road.

Plow drivers pick a lane and stick to it. They drop their speed dramatically to best treat the roads.

"The semis out there and the traffic out there is doing 70 mph and our plows when they're working are only going 35. The closure rate is very fast, it's going to be a couple hundred feet a second," said Condon.

The plows go that slow for a reason.

"They go that slow so they're not kicking up snow or kicking up a lot of ice. And they need to go that slow," said Amber Kettring, Public Relations Manager for the Indiana Toll Road.

Kettring says it's as simple as following one piece of advice.

"Leave about 100 feet between you and the plow driver just in case you come up on him and you don't realize that he's going slower," said Kettring.

The plow trucks are orange and have flashing lights to try to prevent accidents.

"If they're not paying attention and don't see the flashing lights, then it could be a catastrophe. This year minor collisions, very little damage to our plows. The majority of the damage has been to the vehicles that hit us," said Condon.

Last year a crash took one plow truck off the road for the entire winter.

That hasn't happened this year and they're at full capacity with 51 plow trucks.