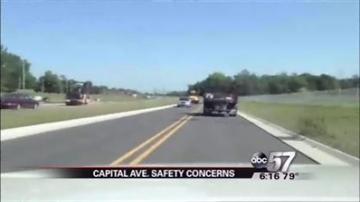 MISHAWAKA, Ind. -- Construction is still underway along Capital Avenue in Mishawaka and drivers are concerned about their safety in the area. Traffic goes down from two lanes to one lane and there's no place to pull over in case of an emergency.

Patience. It's something some drivers are starting to lose while traveling along Capital Avenue.

Lieutenant Tim Williams of the Mishawaka Police Department understands the frustration, but says drivers need to re-examine the road.

There's a big change between the old stretch of Capital Avenue and the new one.

"It's still 35 mph because we still have workers working in that area," said Williams.

The lanes are now smaller and there's no designated place to pull over in case of an emergency.

"Try to make it as far as you can. If you have to pull off because you're having mechanical problems, try to pull up into the grass," said Williams.

Even after the construction ends, the fact there is no place to pull over will still be a concern.

We tried calling state officials to find out why it was planned that way, but haven't heard back.