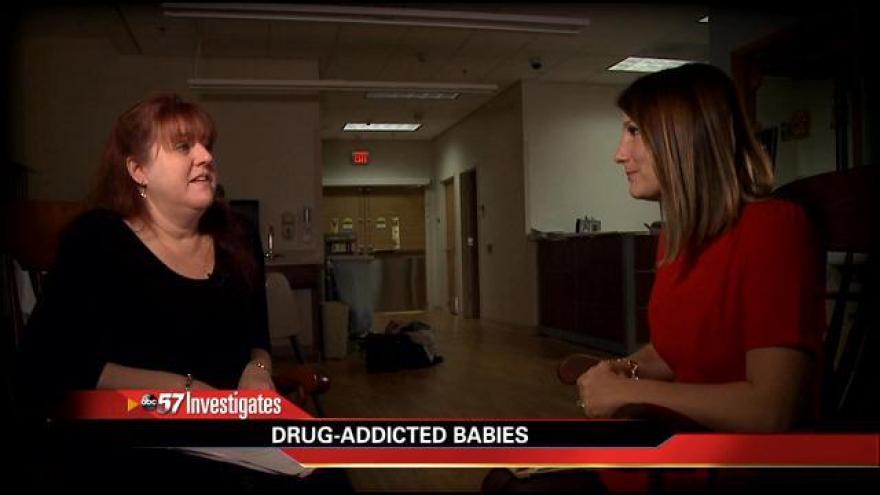 The infant mortality rate in the Hoosier state is one of the highest in the nation, 45th.

ABC 57 discovered one of the growing issues contributing to that staggering number is drug addicted mothers and newborn babies.

There are five times as many cases now as there were 15 years ago all across the country, and medical officials say the trend is on par in Northwest Indiana.

It all starts with an addiction that can grip a mother-to-be beyond reason. It's enough for five percent of all pregnant women statewide to be addicted to hard drugs while carrying a baby.

In Kosciusko County a 24 year old was arrested after giving birth to a baby that had meth in its system just last month.

Her father, John Mills, remembers the moment he found out.

"Our main concern was is the baby ok?" said Mills.

Deputies say both bay and mother were high on meth when Mills went into labor. John said his daughter is one of many who got addicted to a dirty, destructive drug.

"On the inside she's got such a good heart but she just got involved with this drug that is evil," said John.

To this day, Sarah Mills sits behind bars and has only held her baby once. ABC57 learned that her situation is not unique.

"The number has increased significantly over the past five years especially over the past three," said Dr. Kristen T. Hougland who is head of the NICU at St. Joe Regional Hospital.

More than ever Hougland says babies born on heroin, meth and on heavy prescription pills are filling their Michiana hospital. Hougland says they usually have at least two addicted babies born at St. Joe every month.

It's a trend that's wearing on nurses.

"These are some of the most difficult babies to care for in the unit. These babies are very fussy they cry constantly and you are not able to console them," said Hougland.

The trend is also wearing on society.

"The cost is incredible, you don't see it because it's not coming out of your checkbook but it will come out of your taxes," said State Representative Rebecca Kubacki.


ABC 57 crunched the numbers and found out that just to get one drug addicted newborn clean it costs an estimated $50,000.

And over the cost of a lifetime, a recent Indiana report states that one newborn addict can cost society between $750,000 and $1.4 million.

"We have to stop thinking that it is their problem. It's our problem," said Kubacki.


It's why Rep. Kubacki sponsored Indiana Senate Bill 408. For the first time it requires hospitals to document and make a protocol for treating moms before the baby is born.

ABC 57's Kim Chappell asked doctors, "Do you consider this a healthcare crisis?"

Hougland responded, "Absolutely. I think this is one of the biggest healthcare crisis in our nation right now."

Research shows addicted babies are more likely to be abused by parents, end up in foster care or as addicts themselves.

But whats more frightening to Dr. Hougland are the several unknowns that still remain; the first generation of tiny meth or heroin and prescription babies are still so young and still growing up.

"In general we do not really know what this is going to mean for these kids... I think it's frightening," said Hougland.

And when it comes to Sarah Mills, Kubacki and doctors agree that jail time is not the answer to breaking the cycle.

"Putting her in jail is not the solution. The solution is getting her the help that she needs to be become a better mom and get off those drugs," Kubacki said.

And John says his daughter is ready to be the mom her innocent newborn needs.

"She's so sorry and she feels terrible about her self and whitish has done she is now ready to quit and change her life because she finally realizes what she did," John said.