Drunk driver arrested after getting horn happy with police 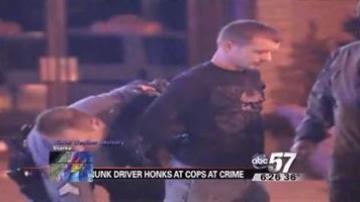 FORT WAYNE, Ind. -- A drunk driver got a little crazy with his horn and ended up in jail.

But that's not all!  The man got out of his SUV and started yelling at the police.

25-year-old jason Spurgeon was mad at police for blocking the road at a crime scene on Broadway Street in Fort Wayne.

Officers said he smelled of alcohol and was slurring his words.

A breathalyzer showed his blood alcohol content was twice the legal limit!

On top of that, his license was also suspended.