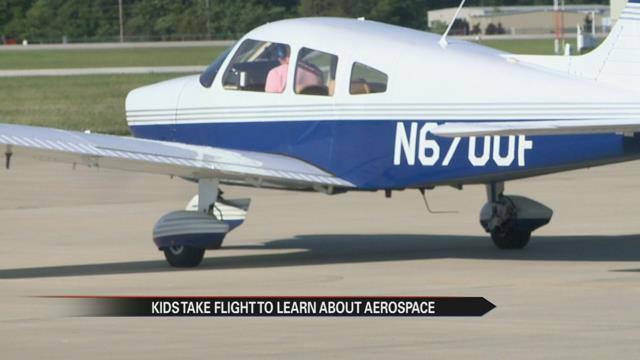 The event gave children between the ages 8 to 17 a chance to fly free of charge.

Many of the children in attendance had never been in an airplane before.

That was the case for Katelyn and Ava Houser, two sisters eager to fly.

“I've never been in a plane my whole life,” said Katelyn.

“I just rode a plane. It was great but kind of scary because I'm afraid of heights,” said 9-year-old Hendrik Wilfing.

The goal of the event was to give kids a taste of what it is like to be airborne.

"So many times they're just on the other side of the fence and they never get to see it. This is a great opportunity for young people to get up in the air for the first time," said Pilot Brett Schuck.

“My mom just said that they were going to have free flights today so I said ‘Okay let's go',” said 11-year-old Lincoln Rigsby.

Schuck has volunteered with the EAA for about 10 years since he got his pilot license in 2005. He said it is always a great time.

"A lot of the pilots here range from people who flew in the Air Force to people who have five to 10 years of experience," he added.

The EAA is a national organization made up of pilots who volunteer their time, planes, and share a passion for flying.

“I go out in town and it's the neatest thing when a kid comes up and hugs me and says 'remember me when went on a flight together?' It's so awesome. It's so fun,” Schuck recalled.

For some it served as an inspiration for a future career in flight.

“I want to be a space man and an artist at the same time,” said Wilfing.

There will be another Young Eagle event in October.