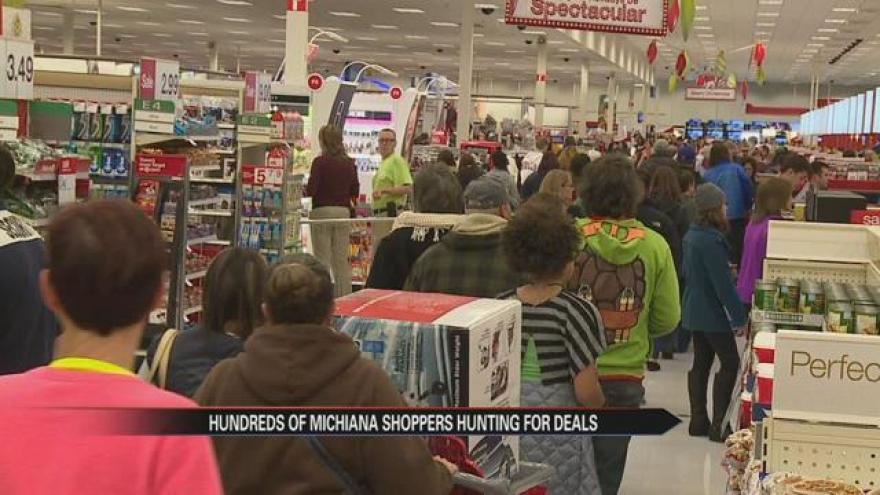 Many Michiana shoppers got a jump start on Black Friday deals and hit the stores on Thanksgiving Day.

Hundreds braved the chilly weather, long lines, and the mad dash at Target in Mishawaka. Ending Thanksgiving celebrations early to score some deals.

Shopper Tiffany Heminger says shopping on Thanksgiving has become an annual tradition for her family.

“I work during the week so having the day off and being able to come the kids and get their early Christmas presents its really fun,” said Heminger.

“There's a huge crowd management strategy that we go through. We are open for 30 hours straight so we won’t close until late tomorrow evening and we won’t close at all overnight tonight so it spreads the business out,” said Hover.

And while many were fighting for deals at the big box stores, quite a few decided to skip Black Friday and enjoy a good film together as a family.

Cinemark Movies 14 was packed most of Thursday evening with families looking to catch a flick after their big turkey dinners.

Some even pushed Thanksgiving dinner ahead to catch a show time that worked for the entire family.

And while across town, people were lining up to grab discounts on goods, folks at the theater saw the good in just being together for the holidays.

“Everybody wants to spend time with family and family is a very important thing during these holidays and this is a good way to do it,” said moviegoer Austin Lauthlin.