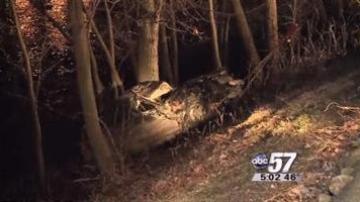 South Bend Police said officers tried pulling over the man in a traffic stop, but he took off in a stolen Jeep around 12:20 a.m.

Police said during the pursuit through South Bend, a woman managed to escape the car after the man sprayed anhydrous ammonia on her near the intersection of 23rd Street and Pleasant Street.

Anhydrous ammonia is a key ingredient used in the production of methamphetamine, and is commonly stolen from farms.

Officers said the man also threw items out of the car during the chase.

The driver ended up missing a turn at Pleasant Street and Wilson Boulevard, went over the stone wall, got airborne, and ping ponged through trees before coming to a final stop.

Officers said the man got out of the car, and crews had to rescue him about thirty yards down shore.

"Our officers did a really good job of getting him out. Obviously with the weather conditions and cool conditions of the water, they threw him a rope and a branch and took him onto shore. Then arrested him," said Captain Jeff Rynearson.

Rynearson said the man only had minor cuts on his face.

Officers have not said whether the woman was injured from the chemical or escaping from the car during the chase.