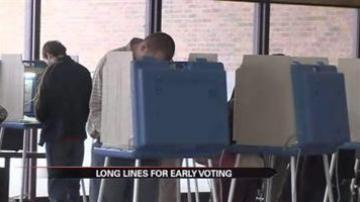 SOUTH BEND, Ind. -- Hundreds of people waited in line for hours at the St. Joseph County-City Building in downtown South Bend to cast their ballots for the 2012 election.

Voting officials are expecting even bigger crowds before Election Day this Tuesday.

"We've had had people waiting in line here before we even opened at noon, and we have quite a few people waiting now," said Cindy Streich, the supervisor of early voting.

St. Joseph County officials say it is too late to avoid the crowds now. But they did suggest having your I.D. can help speed up the process.

Indiana voters have until noon Monday to early vote.