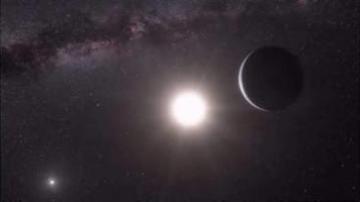 The hunt for planets like our own has come up with a striking discovery.

There's a planet about the same size as Earth and it's right outside of our solar system.

In an image of an artist's impression of the planet, it orbits a star called Alpha Centauri B.

It's the closest planet found beyond our solar system despite being a whopping four light years away. That's about 23.5 trillion miles.

Scientists said it's unlikely that there's another life form on that planet.