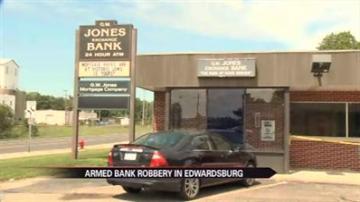 EDWARDSBURG, Mich.--Police say the suspects are still on the loose after fleeing the scene in a vehicle described as a white or silver four-door car with a brown top.

"Around 2:30 we got a 9-11 call from central dispatch that there was a robbery at the G.W. Jones bank here in Edwardsburg," said Chief Kenneth Wray, Ontwa Township Edwardsburg Police Department.

Police continue to review the bank's surveillance video in order to give the best description of the suspects. Here’s what investigators know so far.

"Two black males entered the bank, jumped over the counter, had weapons and told them that they wanted the money," said Chief Wray.

Both black males wore dark clothing and police say one was wearing a gray sweatshirt. They both stood about six feet tall, ordered the employees to the ground, and demanded money.

"They had money in the drawers, we don't know a determined amount. They did get some money," said Chief Wray.

An employee at the Discount Hut across the parking lot told ABC57 news off-camera she heard tires squeeling and saw a large white car flying out of the parking lot. Police are using this description for the suspect's getaway car.