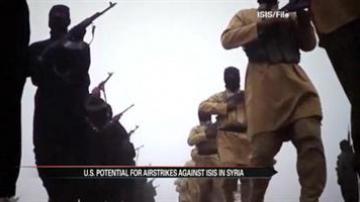 SYRIA -- The murder of journalist James Foley has many eyeing the group behind the crime.

The videotaped killing was not just a message to America, but it also served as a recruitment video for believers in the ISIS movement.

A British born ISIS Jihadi fighter agrees Foley's beheading was a direct response to what he calls the crimes of the US against the Islamic state.

Western security officials fear these fighters will bring their so-called “holy war” home to places like Britain or America.

An estimated 100 Americans have been recruited to fight for Jihadist groups in Syria, including ISIS.
Share this article: