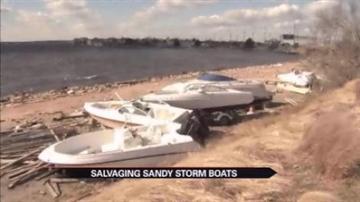 OCEAN COUNTY, N.J. --  An estimated 25,000 boats were destroyed during Superstorm Sandy  and the efforts to salvage some of those vessels have started.

It is difficult for them to retrieve the boats because of wind and more sand that was deposited from the storm. Just another reminder of how much damage the storm caused.

Many boats are still missing and unaccounted for. New Jersey state police have created a database to reconnect owners with boats that are found.