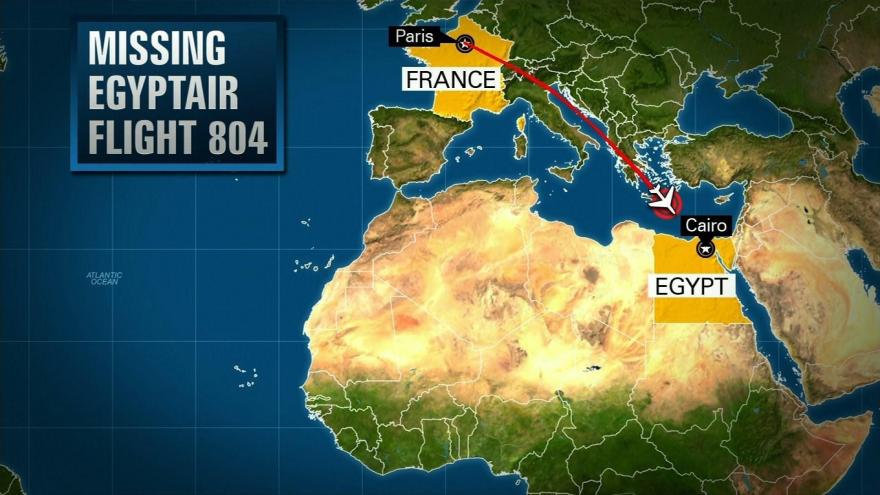 (CNN) -- The search for EgyptAir Flight 804 continues, amid contradicting reports about the aircraft's final moments.

Five days after disappearing en route from Paris to Cairo, some debris from the plane -- including life vests, personal belongings and parts of wreckage -- has been recovered.

Small fragments of human remains have also been found, and officials in the Egyptian capital are trying to identify and match them to victims. Families of the victims have been giving DNA samples to help with the grim task, Egypt's Ministry of Civil Aviation says.

But it remains too early to determine from examining the remains whether or not there was an explosion on the flight, an official at the morgue told CNN.

The search continues for the plane's fuselage and the critical black boxes, which are expected to provide vital clues of the fate of the doomed airliner.

Swerve or no swerve?

At the heart of the confusion over the final moments of the flight are conflicting reports from Greek and Egyptian authorities.

The flight was at 37,000 feet when it lost contact above the Mediterranean, shortly before the aircraft was scheduled to exit Greek airspace and enter Egyptian airspace.

The head of Egypt's National Air Navigation Services Company is challenging that account. Administrative board chairman Mohi El-Din Azmi told Egyptian state-run media Al-Ahram on Sunday that the plane did not swerve or lose altitude before it disappeared off the radar.

The plane was at an altitude of 37,000 feet within the flight path, without any deviation, Azmi said. It disappeared from the radar screens less than a minute after it entered the Egyptian airspace.

Time is working against the investigators -- as is the scope of the search area, with teams searching in waters as much as 10,000 feet deep. Egyptian and French submersibles are working in the area, in an attempt to find the flight data recorders before their transponder batteries expire.

"The investigators are up against the clock," said aviation analyst Justin Green. "If they don't find the black boxes in the next 30 days the job of finding them is going to be much harder because the black boxes may no longer be sending out a sonar ping which will help them identify it."

A representative of an organization devoted to families of French passengers said relatives aren't sure they can trust the Egyptian investigation and want more involvement from France.

"We need the French government in the diplomatic game to put diplomatic pressure and in the search and the identification of the bodies," said Stephane Gicquel, secretary general of the French National Federation of the Victims of Catastrophes.

"We want that the gendarmes can go and work with the Egyptian authorities. So I think there will be a way to track the investigation put in place by the French government with an appointed official to defend the interests of the families in the weeks and years to come," she said.

Gicquel said the families are distrustful of Egypt, in part due to how the country handled the investigation of the 2004 crash of a jet carrying mostly French tourists taking off from the resort town of Sharm el-Sheikh.

Egyptian investigators "cooperated very badly with the French authorities" at that time, she said.

Egyptian government and airline officials have promised to be transparent in the investigation into what happened to the plane.

The investigative committee formed by Egypt's Civil Aviation Ministry said in a statement Tuesday that Egyptian investigators were working with French counterparts "to study all different angles, while prioritizing the recovery of the bodies and the black boxes (flight data recorders)."

On Saturday, French aviation officials revealed that an automated system aboard the plane sent messages about smoke in the front of the aircraft just before it crashed into the sea early Thursday en route from Paris to Cairo.

France's revelation confirmed flight data that CNN obtained from an Egyptian source. That flight data indicated smoke alerts occurred near the cockpit minutes before the crash.

The alerts don't necessarily mean a fire occurred on the Airbus A320 or that the crew even knew about the alerts, which are automatically transmitted, aviation experts cautioned.

There have been electrical problems with window anti-ice heaters in A320s. In 2003, the Federal Aviation Administration required windshields replaced in all A320s in the United States. It's not known whether Egypt followed the FAA directive.

On Sunday, Egypt tasked a submarine belonging to its Petroleum Ministry to look for the plane's flight data and cockpit voice recorders, the so-called black boxes. France sent a remotely piloted submarine of its own to help with the search.

The French vehicle arrived Monday afternoon aboard the patrol ship Jacoubet, according to the French navy. The sub can dive up to 1,000 meters (3,280 feet) and is equipped with an acoustic probe made to detect signals from flight recorders.

The Egyptian military said Friday that it had spotted debris about 290 kilometers (180 miles) north of Alexandria, Egypt.

The search could take days or weeks, experts warn.

Debris and body parts will be taken to a military base and then to Cairo International Airport. EgyptAir has asked families to provide as much information as possible to identify body parts.

Recovered parts of the wreckage will be handed over to the state security prosecutor handling the criminal part of the investigation.

With little physical evidence, the possibilities about the plane remain wide open, from a bomb to a mechanical malfunction to pilot error or even an intentional crash.

No group has claimed responsibility for taking down the jet, and as of now, investigators have found nothing implicating the flight crew or security officials aboard the plane, an Egyptian official said.

The Egyptian Civil Aviation Ministry investigative committee is being led by Ayman al-Moqadem, the investigator also in charge of the inquiry into the October crash of a Russian Metrojet airliner over the Sinai. That disaster, which killed all 224 aboard, is widely believed to be the work of terrorists.

A preliminary report of the investigation will be available within a month, Moqadem told state media Sunday.

On Monday, Egyptian state TV reported that Egypt's prosecutor general, Nabil El Sadeq, has asked Greek officials for transcripts of all calls between the EgyptAir crew and Greek air controllers.

Hours after the flight disappeared, Egyptian Civil Aviation Minister Sherif Fathi told reporters Thursday that an act of terror was more likely to blame than a mechanical failure.

But he was more cautious Sunday, urging the media not to jump to conclusions or speculate about what caused the crash.

"In cases like this we need to wait until we base our judgment on facts," Fathi said in an interview with CNN's Becky Anderson. "We cannot at this stage come up with any conclusion."

French Foreign Minister Jean-Marc Ayrault told passengers' families Saturday that "no theory" had been ruled out.