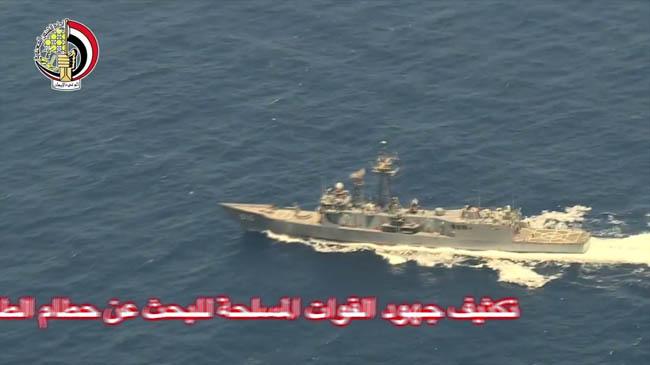 (CNN) -- Some seats and aircraft parts. Personal belongings, including suitcases. And what's described as body parts.

That's what EgyptAir and Greek officials say searchers have found so far in the effort to locate EgyptAir Flight 804, which is believed to have crashed early Thursday into the Mediterranean Sea while flying from Paris to Cairo.

Those announcements followed one from the Egyptian military, which said it had found parts of the aircraft and passenger belongings about 290 kilometers (180 miles) north of the coastal city of Alexandria, Egypt.

Kammenos also said it appears that aircraft crews participating in the search "have located further findings in a different location."

"But we do not have as yet an official announcement if these findings do have to do with the particular aircraft," he said.

The plane was carrying 56 passengers and 10 crew members and security when it left Charles de Gaulle Airport in Paris late Wednesday night.

It disappeared from radar early Thursday as it flew to Cairo -- what should have been about a 3½-hour flight.

On Thursday, the airline's vice chairman said wreckage of the plane had been found at sea, but those initial reports turned out to be false.

When searchers got close to the debris, they realized it was not from the missing airliner, EgyptAir's Ahmed Adel said.

Hours after Adel retracted his statement, the military announced the sighting of the wreckage Friday.

"The presidency, with utmost sadness and regret, mourns the victims on aboard the EgyptAir flight who were killed after the plane crashed in the Mediterranean," the Egyptian presidency said in a statement.

The airline also expressed its condolences.

"EgyptAir sincerely conveys its deepest sorrow to the families and friends of the passengers onboard Flight MS804," it tweeted.

While no theory has been completely ruled out, speculation on what caused the flight to crash centered on the possibility of a terror attack.

At some point before dropping off radar, the plane swerved 90 degrees to the left and then made a 360-degree turn to the right before plunging first to 15,000 feet, then 10,000 feet, Greek officials said.

What Greek officials described as swerving was likely pieces of the aircraft being picked up on radar as they fell from the sky, U.S. officials told CNN on Thursday.

"It's very difficult to come up with a scenario that jibes with some sort of catastrophic failure. (The evidence so far) leads us down the road to a deliberate act," said Miles O'Brien, a CNN aviation analyst.

"But if you analyze this situation properly, the possibility of having a different action aboard, of having a terror attack, is higher than having a technical problem," said Sharif Fathi, the nation's aviation minister.

"All assumptions are reviewed, but none is favored," Foreign Minister Jean-Marc Ayrault told France 2 network Friday. "We have absolutely no indication on the causes of this event."

Ayrault said his Egyptian counterpart, Sameh Shoukry, was not leaning toward terrorism as the cause of the crash.

"He said he wanted all possibilities to be examined," he told France 2.

Ayrault defended security measures at the Paris airport, saying they have been intensified since the November terror attacks.

The Airbus A320 "swerved and then plunged" before descending into the Mediterranean, said Kammenos, the Greek defense minister.

Most of the passengers were Egyptian -- 30 in all. But also aboard were 15 French citizens, including an infant. There were also passengers from Iraq, Britain, Belgium, Kuwait, Saudi Arabia, Sudan, Chad, Portugal, Canada and Algeria, according to the Egyptian aviation minister.

Canada said two of its citizens were on the plane.

Australian Foreign Minister Julie Bishop said the British passenger had Australian citizenship as well. It is unclear whether any other passengers were dual citizens.

Greece, France, the United States and other nations were searching about 130 nautical miles southeast of the Greek island of Karpathos, Greek aviation officials said.

The United States added two additional P-3 Orion aircraft to the effort Friday, according to a U.S. defense official, with more expected "throughout the day and night until tomorrow morning to achieve continuous coverage."

Greece has offered the nations involved in the search the use of military bases on the island of Crete, Greek Defense Ministry spokeswoman Jorgo Poulos said.

The European Space Agency said Friday that its Sentinel-1A satellite had spotted a 2-kilometer (1.24-mile) oil slick near where the plane is believed to have crashed. The agency said it's possible the slick could be from another source.

The crucial cockpit voice recorder and flight data recorder have yet to be located.

As crews searched, somber relatives gathered in Cairo and Paris airports, seeking word on their loved ones.

The Egyptian Civil Aviation Ministry has formed an investigative committee to look into the crash of EgyptAir Flight 804. It will be led by Ayman al-Moqadem, the investigator who is also heading up the inquiry into the October crash of a Russian Metrojet airliner over the Sinai, the agency said in a statement. That disaster, which killed all 224 aboard, is widely believed to be the work of terrorists.

Earlier Friday, three French technical safety investigators and a technical expert from airplane manufacturer Airbus arrived in Cairo to help with the investigation, according to the French Embassy in Egypt.

The investigators are from France's Office of Investigations and Analysis, which investigates aviation accidents.

The investigation will include looking at the aircraft's flight crew as well as the ground crew members and anyone who had access to the plane in Paris, U.S. officials told CNN.

French investigators will focus on that aspect first, the U.S. officials predicted. It will be up to Egyptian officials to scrutinize the crew, security and passengers on the flight, the officials said.

Investigators looking at the wreckage will want first to locate the nose, tail and wings of the aircraft, Deborah Hersman, a former chairwoman of the National Transportation Safety Board, told CNN on Thursday.

"They are going to be looking to check those control surfaces to make sure that they are intact, and certainly if there is any sign of an explosion or foul play, they are going to look for markers of that," Hersman said.

The flight data recorder and cockpit voice recorder will also be key, she said.

"The flight data recorder is going to have potentially hundreds or a thousand parameters, everything from speed and direction to kind of control surface positions," she said. "The cockpit voice recorder can be tremendously helpful because they can hear the communication not just between air traffic control and the pilots, (but also) between the pilots and each other, between the pilots and cabin crew."

-- The pilots were identified as Mohamed Said Shoukair, the plane's captain, and first officer Mohamed Mamdouh Ahmed Assem, according to an official close to the investigation and a security source.

-- The plane's captain had about 6,000 flying hours, EgyptAir's Adel said. Maintenance checks on the plane had reported "no snags."

-- Checks of the passenger manifest have so far resulted in no hits on terror watch lists, officials with knowledge of the investigation said.

-- An initial theory is that the plane was downed by a bomb, two U.S. officials told CNN. Officials said the theory could change, with one senior administration official cautioning it is not yet supported by a "smoking gun."

-- The jet had routine maintenance checks in Cairo before it left for Paris, the airline said. Earlier Wednesday, the jet was also in Eritrea and Tunisia, data from flight tracking websites show.

-- The plane has been part of EgyptAir's fleet since November 2003, according to Adel.