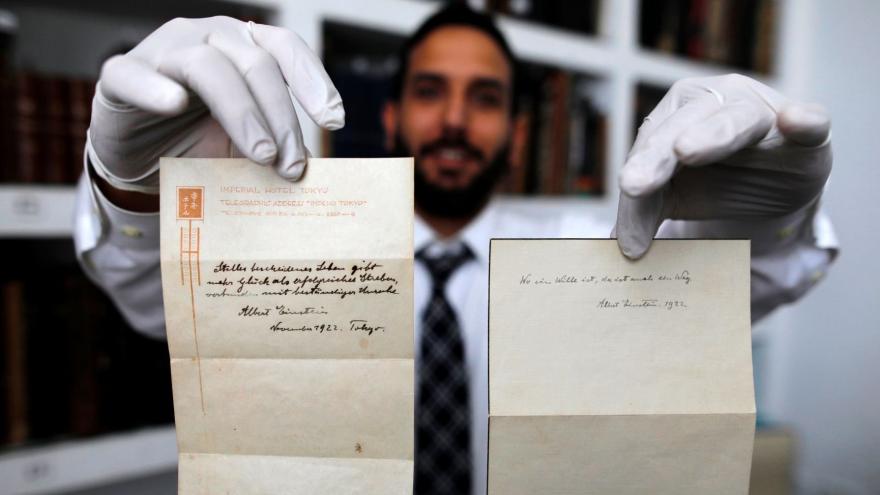 (CNN) -- Two handwritten notes penned by Albert Einstein have been sold at an auction for a combined $1.8 million -- hundreds of times their estimated sale value.

The notes written in German, which the famed physicist gave to a Tokyo courier in November 1922 in lieu of a tip, contain two aphorisms for happiness.

The first, which sold for $1.56 million, reads: "A calm and humble life will bring more happiness than the pursuit of success and the constant restlessness that comes with it," according to a translation from the auction house, the Israel-based Winner's.

The notes are written on notepaper from the Imperial Hotel in Ginza, Tokyo, where Einstein was delivering a series of lectures.

He was traveling to Asia when news that he had won the Nobel Prize for Physics reached him via telegraph. Einstein was unable to attend the prize-giving in Stockholm, but received a rapturous welcome in the Japanese capital.

Capitalizing on his newfound fame, he gave the two notes to the messenger, who had delivered something to his room. Tipping is not customary in Japan.

"He told the messenger to keep them, as their future value may be much higher than a standard tip," the Winner's website recounts.

Another two typewritten letters from the scientist were sold for a combined $43,200.

The 100th anniversary of his Theory of Relativity, for which he is best known and which fundamentally changed our understanding of the universe, was celebrated in 2015.