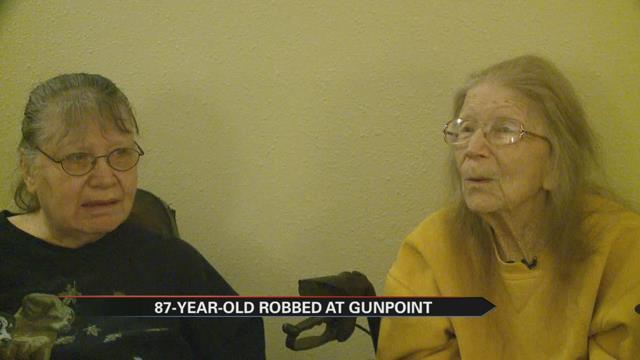 An 87-year-old woman and her 68-year-old special needs daughter were robbed at gunpoint Tuesday inside their home in Niles.

“Well, I was getting my special needs daughter ready to go on her van to a program,” Nadine Weightman said. “And there was this loud knock.”

That knock was on her front door on 12th Street in Niles just before 8 a.m. Tuesday morning.

Weightman’s daughter, Deedee, has special needs and attends a program similar to school, so Weightman thought the knock was the bus driver.

“I thought maybe they were coming early,” Weightman said. “So I answered the door and he just put his foot in, and then he came in and shut the door behind him.”

In that moment, Weightman and Deedee’s lives changed.

Weightman’s small home, outfitted with wind chimes and Christmas decorations outside, quickly became the scene of an armed robbery.

Weightman told the man she didn’t have any money. He then turned to Deedee.

“And he said, ‘does she have money?’” Weightman said, referring to her handicapped daughter. “And I said, ‘She might have some money, yeah.’ And he said, ‘Get it.’”

The man collected about $145 from Deedee’s purse, had Weightman hand over three phones she had in the house – one cell phone and two cordless phones – and in minutes, he was heading out the door.

“He started to leave,” Weightman said. “I, I remember I told him I’d pray for him.”

The man ignored her comment, but he did say something.

“He told me if he saw the police come, he’d be back,” Weightman said. “And when he pulled the gun [at the start of the robbery], he said, ‘Yes, this is real.’”

The man left without firing a shot, but Weightman was too afraid to call police.

“I was so fearful,” Weightman said. “I just started shaking and I just knew we was gonna get killed.”

Thankfully, one of Weightman’s neighbors saw the man leaving the 87-year-old’s home and called police.

But a few days later, Weightman and Deedee have yet to return home.

“I’m not going back there,” Weightman said. “Ever.”

When asked what her plan was, Weightman said she didn’t know and that she is “floating it right now.”

The mother and daughter are staying in an undisclosed location.

Though the future is uncertain, Weightman said she will get through this with Deedee – the same way she has raised her daughter for 68 years, even though doctors told her Deedee would not live past age 12.

“I live for her,” Weightman said, referring to Deedee. “So she doesn’t have a choice – she’s gotta live,” she added, with a laugh.

Weightman and Deedee’s only income is the social security checks they both receive – so money is tight.

Even though an agency has reached out to Weightman and is offering to pay a deposit for a new apartment or home for the mother and daughter, Weightman said paying future bills may be troublesome.

Still, Weightman said her experience with the armed robber was just too chilling. She said she cannot return to her home, even though she loves it and her neighbors.

“We loved that home,” Weightman said. “We loved it. I could sit on the porch, watch the flowers my neighbors put out for me. Deedee could ride on the sidewalk with her power chair. We loved it out there. But I don’t feel like I could lay down and go to sleep there [anymore].”

A Niles Police detective did not respond on Friday when contacted about the investigation taking place after this robbery.

As of Friday, police had not yet identified a suspect.

Weightman said the man who robbed her and Deedee was dressed in all black – a black snowsuit, black hat, black ski mask and black scarf. She said she could tell the man was black, but she couldn’t identify anything more than that.

If you are interested in donating money or other items to Weightman and Deedee, you can drop them off at the Rite Aid Pharmacy in Niles (Address: 11 S 11th St, Niles, MI). Ask for Jamie in the pharmacy.

If an online fundraiser is started for Weightman and Deedee, we will post the link to it in this story and on our Facebook and Twitter pages.

Anyone with information about this armed robbery is encouraged to contact Niles Police.