Election board keeps polling at West Side Democratic Club 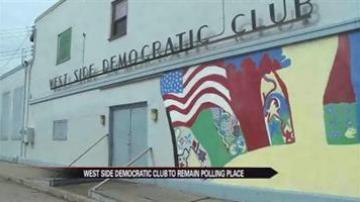 SOUTH BEND, Ind. -- A decision by the St. Joseph County Election Board will keep polling at the same location they have for decades.

The West Side Democratic Club has been a polling location since 1950s.

Last month, allegations of corruption and fraud were made when Republican Chairwoman Deb Flemming insisted the location should not be used. The election board gave her the opportunity to show evidence Monday morning.

Instead, Flemming argued the club had access problems that the locations name and a picture of President Obama could influence or intimidate voters.

"Just last month, she alleged there were people who refused ballots, that they was fraud, and corruption that occurred here, and the board provided her with a platform to present evidence of that and she presented no evidence of any fraud or any corruption," Sen. John Broden, St. Joseph County Democratic Party Chairman.

Flemming, however, maintained her position.

"I don't think that it's an appropriate location to have a facility as a polling place that is a political club because it's definitely not non-partisan," Flemming said.

The election board ordered the problem with access to be fixed and the president's head-shot removed by Wednesday.