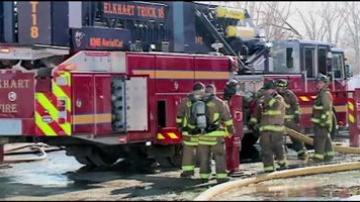 ELKHART, Ind. -- Elkhart fire investigators are looking into what caused a building to go up in flames Sunday afternoon.  It happened at Premium Concrete Services in Elkhart around 1:00 p.m.

Nobody was inside the building at the time of the fire.

Crews say the damage is extensive.

Crews arrived on scene in only four minutes, but had to hold back a couple more minutes because the chemicals and equipment inside were causing a concern.

"We had a pretty good explosion," says Wes Johnson, the Battalion Chief with Elkhart Fire Department. "There was settling tanks, oxygen tanks and propane inside."

The damage is making it hard for investigators to figure out what caused the blaze.

They plan to bring in engineers to determine if the structure of the building is safe enough to continue their investigation.