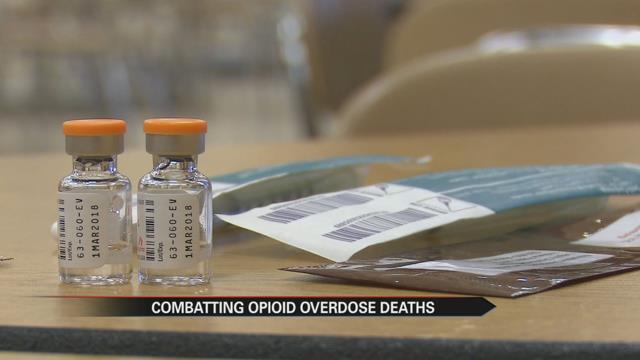 One addiction support group in Elkhart hosted a naloxone training session this afternoon, where they gave out free kits to more than 60 people.

They even had to change their venue to Pierre Moran Middle School a week ago, because more people said they were going on Facebook than the original place could fit.

Organizers say the turnout proves how big of a problem opioid addiction is in Elkhart.

Teary eyes reflect memories of loved ones lost to heroin.

“A very dear friend overdosed in July, and it was from heroin with a fentanyl cut,” said recovering addict Beth Seabolt.

According to the Indiana State Department of Health, “There’s actually more people dying from heroin and opiate overdoses than there is from vehicular accidents now,” said Nathan Phillips, one of the founders of Overdose Life Line, Inc.

Beth could have joined that list, if it hadn’t been for naloxone.

Which is why one addiction support group in Elkhart, Gweedo’s Purple Shamrocks, decided it was time to arm the public with narcan, another name for naloxone.

“These are the people that are going to be right there when these overdoses are happening a lot of the times, so it’s important to get it into their hands,” said Gweedo’s Purple Shamrocks founder Sam Callantine.

Sam’s brother—the Gweedo in Gweedo’s Purple Shamrocks—didn’t have that resource in May.

To try to prevent another family from losing a loved one, the Shamrocks partnered with Overdose Life Line, Inc., giving out free naloxone kits to more than 60 people in Elkhart Saturday—along with a tutorial.

“It was very easy to use,” said Seabolt.

And Gweedo’s hopes that as more people realize that, it will be one step closer to its mission of eradicating heroin from Elkhart.

“The fact that so many people came out kind of makes a statement that our community’s not going to lay down and just take this and let this epidemic just happen,” said Callantine.

The reason the public even has access to naloxone is because of Overdose Lifeline, Inc. Its founder helped to create Aaron’s Law in April 2015. The whole purpose behind it is to allow organizations to distribute naloxone to the public without a prescription.

In 2017, you’ll be able to find naloxone at any pharmacy in Indiana.