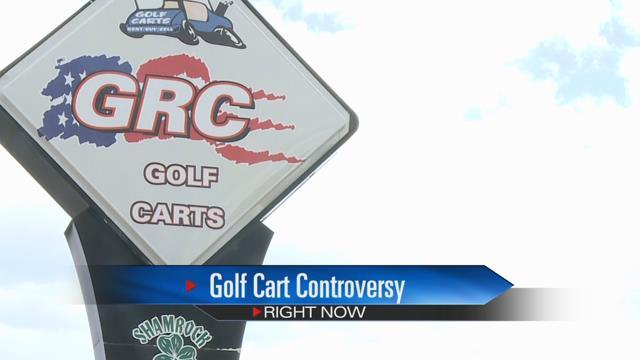 Six companies across the country are out thousands of dollars.

One of the owners of GRC Golf Products in Elkhart saying tonight it was embezzlement and they're working to fix the problem and help those who have lost their trust and money.

A local company locked up.

Customers tonight across the country upset and duped out of thousands.

"They took the money out of my checking account. By May 11th is was out of my account. They told me the carts would be delivered. The carts never showed up,” said Bibeau.

Bibeau said the owners at GRC Golf Products sold her over $19,000 in golf cars then cashed the check and never delivered the products.

"I contacted the Elkhart Police Department. They told me there was nothing at their location any longer," said Bibeau.

His company started doing business with GRC four months ago.

“I sent him 100,000 up front. I didn’t get all of them. Then I ordered more. I ordered regular golf carts then I ordered them listed, new tires, you know what I mean,” said Lieurance.

Ed Sullivan is the lawyer representing GRC Golf Products. They released this statement.

“The company discovered several discrepancies. Since then, management has changed. The owners are taking over those responsibilities and duties. The company is moving “quickly” to get accurate information so it can address any problems that have been created.”

He says GRC is communicating with its customers.

The last communication Terese Bibeau had was this email on June 3rd.

"I think I was more hurt. I’m the type of person that if I walked out of your store with your pen I will walk back and bring your pen back to your counter. It was hard for me to think that someone would steal from me. Or steal from anyone," said Bibeau.

The police telling our reporting partners at the elkhart truth that they have do not have any open cases at this time - and that this is a civil issue.

Bibeau says she doesn't expect to get a dime of her money back - but she has learned to forgive people and move on.