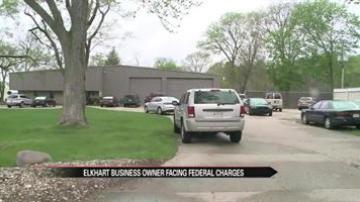 ELKHART, Ind. -- This week, Granger resident James Ledonne was arrested after a grand jury indicted him on 17 counts including wire fraud, interstate transportation of stolen goods and bankruptcy fraud.

The offices of Paragon Technology Group were raided by federal investigators on May 9th. Hundreds of boxes were seized.

Two people who used to work for Ledonne said they knew something strange was going on when they got call after call from angry customers.

He was part of a small crew that built mobile fiber optic splicing units for Ledonne.

"The way they used to have it is you would go to the plant to splice it. This was basically so they could do it on the go. It's got a great market, it's a great idea, just a bad guy running it," said Barnard.

In Barnard's four months working for Ledonne, he says he helped to complete just three trailers.

He says if Ledonne had allowed it, they could have built about three units a week.

"Full crew, we could have gotten these out three days each trailer. It wasn't as difficult as you would think," said Barnard.

According to the indictment, Ledonne took more orders than he could fill. And he asked for $15,000 up front - half the cost of the trailer.

He allegedly never delivered on the product.

"$15,000 was half of it. That's what they would put down on it, that was the wire transfer and that was to guarantee that they would get one, and then they were supposed to pay the other half when they got the trailer," said Lauren Nelson, another former employee.

While Barnard was in the shop, Nelson was in the office fielding calls from angry customers who wanted their $15,000 back.

She says they got about four or five calls every hour.

"It wasn't just the customers, it was people we were buying product from, one person he wrote a false check for and the check bounced, and they were trying to get a hold of him," said Nelson.

Nelson says Ledonne rarely took any calls she forwarded to him.

Although both Nelson and Barnard say they are relieved to hear the man who they believe deceived them was caught, they say it's still a tragic ending for the people he allegedly defrauded.

"This is terrible," said Nelson.

"I wish there was some type of retribution that he could give to the people that he scandaled [sic], but I just don't see how," said Barnard.