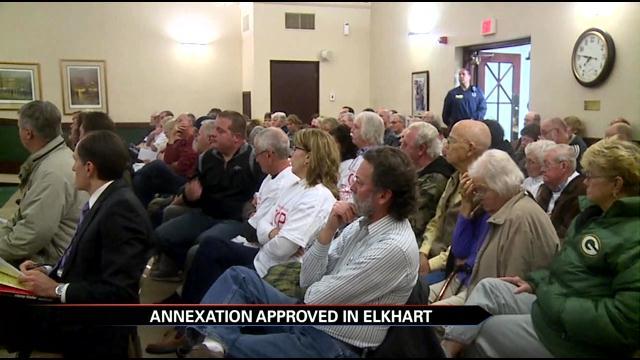 Things were heated inside Elkhart City Hall Monday night. The City Council opened up discussion on whether to appropriate $250,000 in tax payer money to help fight their legal battle with residents over annexation.

Residents on the anti-annexation side packed the council chambers. They weren't afraid to let the council hear how passionate they are over this issue.

Their anger stems from Mayor Dick Moore's proposed plan to annex parts of the county.

Residents filed 3 separate lawsuits against the city of Elkhart.

The council voted in favor of using $250,000 out of the Great Elkhart Fund to pay for the city's legal fees.

The reason people are angry over the annexation plan is because it could cost them. If they were made a part of the city of Elkhart, they'd have to pay higher taxes for city amenities.

Residents who've lived in the county for a long time don't want the change, nor the added expense.

The Elkhart City Council pointed out, the $250,000 is not what they intend to spend it's just a cap amount. Meaning, whatever is not spent on legal fees will go back in to the Great Elkhart Fund.