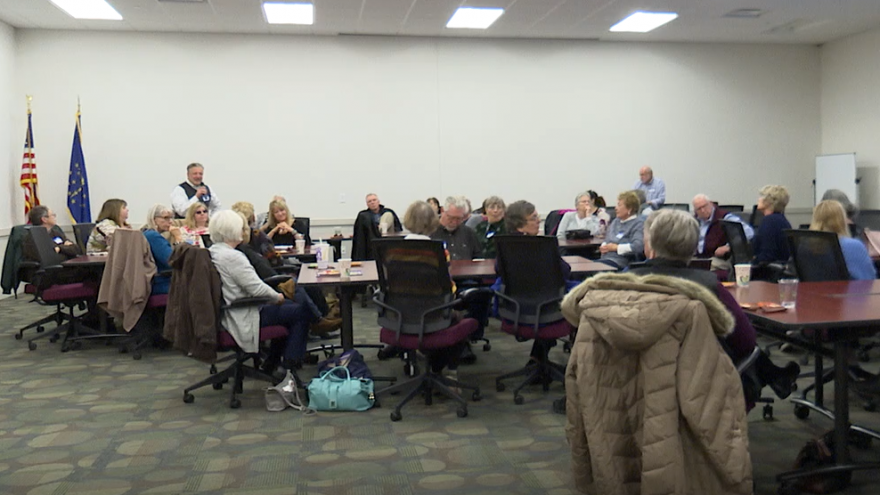 ELKHART, Ind. --- The Elkhart County community coming together to look for solutions and raise awareness for the homeless Wednesday at Ivy Tech College.

A discussion was hosted by the Elkhart League of Women Voters where guest speakers from the Elkhart City Homeless Coalition discussed the problems.

The coalition estimates about 25-50 people in Elkhart will sleep on the streets Wednesday night.
Angie Wogoman, the Director of Homeless Services at Guidance Ministries, said it’s an important topic to give attention to.

"Homelessness is such a big issue in Elkhart and a lot of times I think its swept under the rug,” Wogoman said.

In Elkhart County there are limited resources for those without a roof over their head including a lack of low-income and affordable housing. The main two shelters in the county are Faith Mission in Elkhart, a long term shelter sheltering men, women and families, and the Interfaith Center in Goshen, which shelters only women and children but also offers winter amnesty.

Elkhart resident Sharrod Blackwell thinks there should be more options.

Mike Settles with the League of Women Voters who hosted tonight’s event says it all starts with awareness.

Elkhart mayoral elect Rod Roberson was not able to make it to the discussion but sent two representatives in his place.
In a statement a spokesperson said in part: “Rod intends to build a coalition with well-informed individuals and nonprofits working locally to serve the needs of the homeless here in Elkhart. I thank the League of Women Voter’s for shining a light on these issues.”

To donate supplies to homeless shelters in Elkhart, you can visit Guidance Ministries at 216 N 2nd St. Elkhart, IN, Faith Mission at 801 Benham Ave, Elkhart, IN, or the Goshen Interfaith Center at 105 S 3rd St, Goshen, IN.