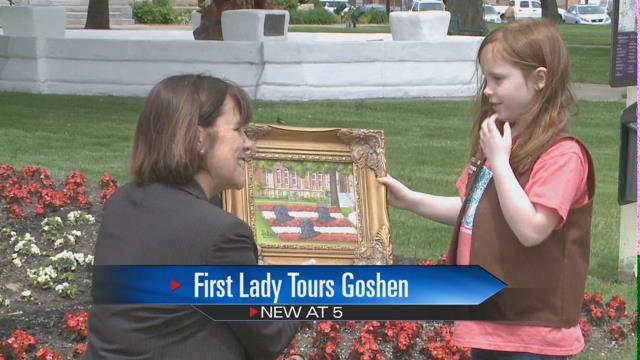 On Monday First Lady Karen Pence began a tour to check out bicentennial celebration plans throughout the state. The first stop on her list was Elkhart County.

First Lady Pence was in Elkhart County as the Ambassador of the Indiana Bicentennial Commission. This is a group planning and carrying out a statewide celebration for Indiana's 200th birthday.

All 92 counties have legacy projects that are being endorsed by the state and on Monday Elkhart County was the first county to present its projects.

“We found out that Elkhart County is doing such amazing things up here that that's going to be our first one so this is our very first visit,” says Indiana's First Lady Karen Pence.

The Hoosier state officially turns 200 years old on December 11, 2016 but a 12-month long celebration will begin this December.

The intent is to bring all 6.5 million Hoosiers together while enticing visitors to check out local attractions like Goshen's garden quilts and local shops like Olympia Candy Kitchen.

“We want to make the bicentennial celebration grass roots celebrations and hopefully this will drive tourism in the state of Indiana,” says Rene Stanley, Deputy Director of the Indiana Bicentennial Commission.

Stanley encouraged First Lady Pence to spend her first tour checking out local jewels like the Elkhart Jazz Festival and the Elkhart County 4H Fair, as both presented their bicentennial plans.

“I'm really excited today to hear about Firsts Fridays, which they do here in Goshen which are wonderful things that people can start coming to right now,” says First Lady Pence.

“It's been a really successful event and we appreciate the first lady recognition of the significance of that event and what it has done for our community to bring people together and how it has helped small businesses grow,” says Leichty.

Leicthy says First Fridays with bicentennial themed event are in the works. It takes a couple weeks for a project to become approved as a legacy project. These projects receive state wide promotion from the Indiana Bicentennial Commission.
Share this article: