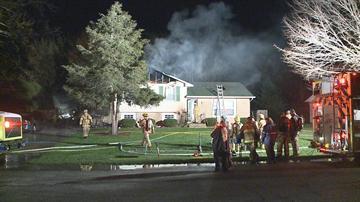 CONCORD TOWNSHIP, Ind. – A home on the 56000-block of Pine Crest Drive is a total loss after a garage fire spread to the house on Friday night.

The Concord Township Fire Department was called to the home at around 8:30 p.m. and arrived to find the attached garage engulfed in flames that were spreading to the roof of the house.

“We made an aggressive interior attack, but couldn’t stop it,” described Deputy Chief Don Mansell.  “We just ended up losing most of the house.”

The neighborhood didn’t have any fire hydrants so the department had to call in backup to bring in enough water to put out the fire, around 50 firefighters were called to the scene.  Thankfully, everyone inside the house was able to make it out safely.

“There was about 8 to 11 people home at the time,” Mansell explained.  “Everybody did get out, nobody got hurt.”