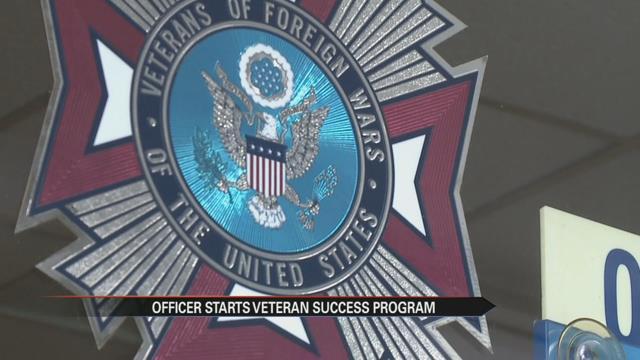 Elkhart County is joining the fight for vets’ rights by reaching out to troubled war heroes.

The county’s jail is working to curb the number of former fighters entering the justice system by setting them up for success.

He knows how hard it is to readjust post-deployment.

So while he makes strives to move on with his life, he’s teaching his military brothers and sisters how to move forward as well.

“In the army a part of our warrior ethos are ‘we’ll never leave a fallen comrade,’ and that’s applicable to once we’re out as well,” said Lt. Edwards. “I felt like I was leaving my fallen comrades.”

The feeling bothered Lt. Edwards since joining the jail.

For eight years he watched quite a few inmates with noble pasts throw away their futures.

“I’ve seen some veterans come in and out of our facility,” he said. “Some of those veterans are veterans I deployed with overseas.”

According to the Department of Veteran Affairs, one-tenth of the U.S. prison population is made up of veterans.

“The substance abuse they have due to mental issues or PTSD coupled with homelessness drives them to do crime,” said Lt. Edwards.

So the jail is working to end that PTSD to prison pipeline.

“Veterans justice helps them out with giving them a place to stay, getting them mental help, resources and help they need and substance abuse help they need  when they leave this facility,” said Lt. Edwards.

The jail leads lost vets to local resources that help them get monetary support for their service.

One resource is the Elkhart County Veterans Service Office.

“That can be overwhelming sometimes and we provide instruction on that,” said Jim Snowden, Elkhart County Veterans Service Officer. “They come with their needs and because we do so many claims over a year we come in handy.”

The jail also connects them with clubs aimed at keeping veterans social like Veterans of Foreign Wars Post 88 (VFW 88).

“Friday nights they got a band that comes in and we all have a good time,” said VFW guest Janet Miller.

Because in this county, support for the troops doesn’t end when they return home.

“The old saying is a country that forgets its veterans will itself be forgotten,” said Lt. Edwards.