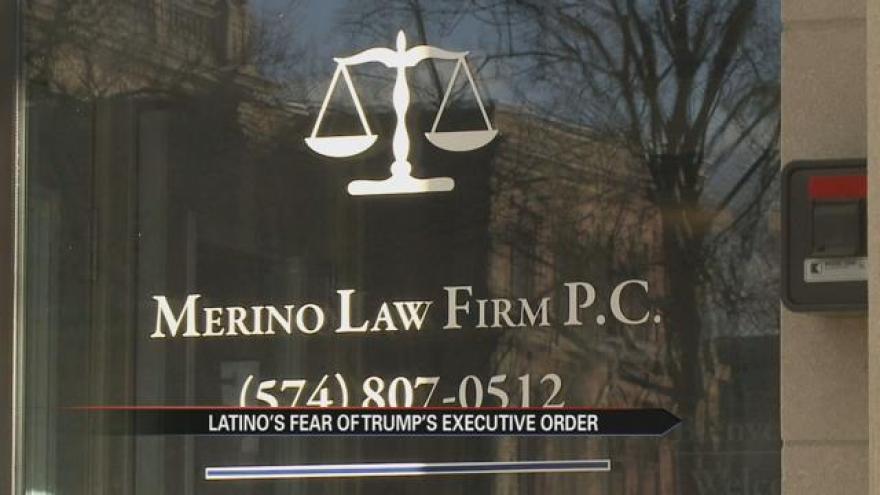 ABC 57 has been reporting on the fall out of some President Donald Trump’s executive orders and now we’re learning the Latino community in Elkhart County may be directly feeling the effects.

Attorney Felipe Merino says there’s been an increase in detentions he says this ramped up after President’s Trump executive order on January 25, which allows immigration agents to detain anyone they come in contact with who has crossed the border illegally.

According to Merino, this is causing uncertainty and fear.

“They’re afraid because they don’t know if they’re going to be able to continue supporting their children, their families and living in this community that has become their home,” said Merino.

Attorney Merino has been working immigration cases for nine years and Thursday he said in the last couple of weeks he’s noticed an increase in immigration holds. “Here locally at the Elkhart county jail there have been many more detentions by immigration customs.”

Elkhart County Jail have not released a specific number. But how do these detentions happen? Commonly there’s some sort of traffic stop.  When that individual is pulled over, one would normally hand over your driver’s license, registration and insurance.

“Individuals that don’t have legal status are consequently more nervous because they know they may not have a license,” said Merino.

Merino added at that point the officer has two choices,  just deal with the traffic stop or proceed to ask questions. “They begin to ask questions about legal status or about their employment.”

Although law enforcement doesn’t work for immigration, merino says they can still question anyone that’s of interest.  In fact, Merino has seen people who are citizens get detained as well.

“They were born in the United States and taken and raised in Mexico and they came back when they came back because this is their county and so they don't speak the language,” said Merino.

Merino suspects it has a lot to do with how the officers perceive the individual. “You speak with an accent or people get the idea that maybe you're not from here.”

According to Merino the thing undocumented individuals need to know is that officers will respect your right to remain silent and your right to privacy.

“The vast majority of the people that have undocumented status here in the united states is not because they want to be breaking the law continuously  and they don’t want to take proactive steps to rectify the situation,” said Merino.