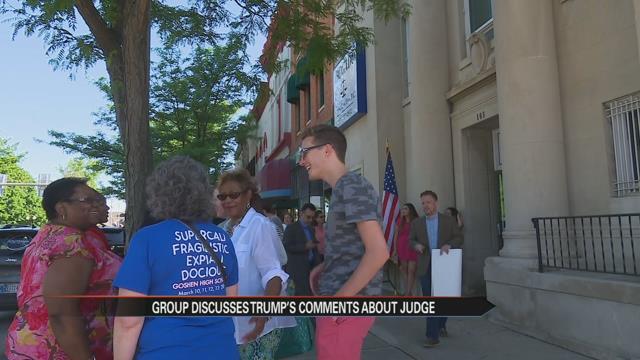 But not everyone in Elkhart County thinks Trump’s statement is a reason to change their vote.

A majority of the leaders in attendance were Latinos and African Americans.

The crowd who showed up in support of the event was made up of people of different races and ages gathered to share one message.

“We don’t want this kind of redirect we want to have a positive focused campaign we to accentuate positive values like equality and freedom and tolerance of differences,” says
Richard Aguirre.

Aguirre along with local attorney Felipe Merino called a public gathering after Donald Trump said a federal judge; Gonzalo Curiel is biased because of his Mexican heritage.

Curiel is from East Chicago, Indiana and is overseeing a lawsuit against Trump University.

“And we can’t stand idly by and watch as he tears down a very important person in our community Judge Curiel is a native of Indiana a United State citizen of Mexican heritage,” says Merino.

Merino is a Mexican-American attorney and says Trump has gone too far.

From the dozen of people who supported Monday’s event many, there are others in the community who agree.

“I come here in support of my Latino community, the Muslim community, the disable community, woman all those people that Mister Trump has choose to denigrate because that’s not what America is about,” says Arvis Dawson of Elkhart.

Dawson works for the city of Elkhart and although many at the event share his feelings, Trump signs can still be found on front yards in Goshen.

“He goes with the moment and if someone would have been talking to him in a calm matter and not thrown something at him it would have come out differently,” says Shirley Snyder of Goshen.

Snyder says the sign in her front yard will stay there regardless of the presumptive GOP candidate’s recent comment.

“He isn’t going to back down to the other countries and I think that’s important,” says Snyder.

But for those who aren’t attracted to Trump’s style they are pleading with the public to head to the polls this November.

Lynn Coleman who is running against U.S. Representative Jackie Walorski and he also attended the event.

Coleman was campaigning asking other public official to publicly denounce trump for his comments.

This weekend, congresswoman Walorski told ABC57’s reporting partners at the Elkhart Truth in an email statement that, “Questioning a judge’s impartiality based on his ethnicity is not only inappropriate, it has no place in American society.”