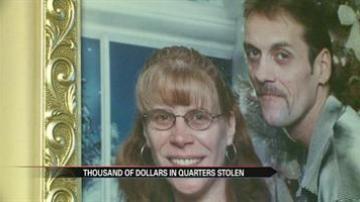 ELKHART, Ind. -- Elkhart Police are investigating the theft of more than $15,000 in quarters, which was a woman's inheritance.

Cassandra Ellsworth's father saved quarters for 15 years and they were worth about $15,000.

They were stolen Wednesday.

"I walked in the front door and I noticed the two doors were open and I went into the bedroom to where the quarter were and they were gone," said Cassandra.

According to police reports, one or more suspects broke into the Ellsworth home and stole the quarters.

Cassandra says she just wants justice to be served to the people who broke into her home.

If you have any information about this crime, you are asked to contact the Elkhart County Sheriff's Department.