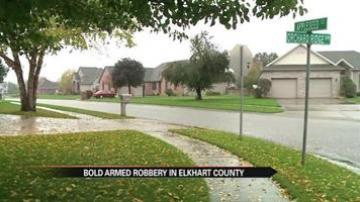 ELKHART COUNTY, Ind. -- An armed robbery happened at a home on Appleseed Court in Elkhart County just before 5 p.m. Wednesday. That means residents will have to be on special alert Halloween night.

Police say the victim had just walked into her garage when the armed suspect approached her from behind and demanded her purse.

After a brief struggle, the thief took off with her bag.

Police have little to go on.

"We're concerned in the fact that this more than likely is a random act that happened, but we want our people protected. We want them to know and have knowledge of what's happing in their area," said Captain Jim Bradberry of the Elkhart County Sheriff's Office.

The attack has left many in this neighborhood on edge and uninterested in talking about what happened.

"Obviously, they are concerned and they're on alert, and they need to be watching out for each other," said Bradberry.

On Halloween, many of the residents will be looking over their shoulder.

"Most of the people out there participating tonight are going to be younger kids; and so I would be a little concerned if somebody that was an adult approached me wearing an outfit and they weren't accompanied with a child. That would kind of be an alarm to me that that's not quite right," said Bradberry.

Bradberry says it's always a good idea to trick or treat in groups and take your cell phone in case of emergency.