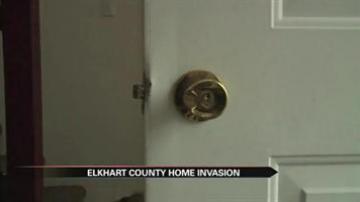 JACKSON TOWNSHIP, Ind. -- The Elkhart County Sheriff's Department is investigating an armed robbery that happened at a home in the 71000 block of SR15 Monday around 9:40 p.m.

"To hear about the assault they performed on my parents was very disturbing and it could have been deadly. We are so lucky it didn't turn into a double homicide," said Darren Neer, son of the victims.

Darren Neer's elderly parents were home Monday night when a man knocked on their door.

Osswald is a police officer from Hamilton County.

He says he never thought a crime like this would happen to his own family.

He says the suspects assaulted his father in law until he lost consciousness.

His mother in law, he says, was dragged to a bedroom, where one of the men tried to rape her.

"She turned and said, 'No. You're going to have to kill me before you do anything to me,'" said Osswald.

The woman was able to talk the intruder out of sexually assaulting her.

"He said he was sorry and remorseful and by saying that she feels like she was witnessing and was saved from sexual assault," said Osswald.

"He didn't perform the sexual act he had intended to so I want to thank him for that," said Neer.

The couple's family say they think the Neers were targeted because of their place in the small New Paris community.

"This doesn't happen in this community. I feel strongly that they were targeted," said Osswald, "They were going to go down fighting so I'm asking if anybody knows anything to come forward."

The victim is at Goshen Hospital with broken bones and a fractured skull. His family says the two robbers got away with valuables and a number of rifles.