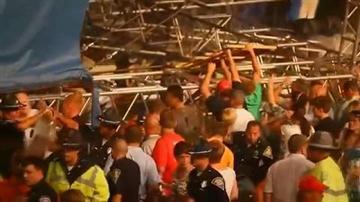 The stage was nearly set for Sugarland to begin their concert Saturday night, but dark clouds had begun to gather nearby. The wind was starting to pick up, Steve Kamp could see a cloud of dust being blown toward the stage along the dirt track.

That’s when Kamp saw the rigging begin to move above the stage, and the roof tear free. It was clear to him from his vantage point in the first row of the grandstands that something was wrong. “I knew something bad was about to happen,” said Kamp, a firefighter from Elkhart.

Half-blinded by blowing dirt, Kamp watched helplessly as the stage fell apart and came crashing down on dozens of people. “Just seeing the people disappear under it, was just something that will always stick in your head,” said Kamp.

After the windblown dust had passed, Kamp and his wife, an emergency room nurse, headed straight for the stage. They joined dozens of others, both trained and untrained in lifesaving techniques, as they attempted to save those who could be.

Kamp found that disaster drill training had helped prepare him for dealing with the situation, but was frustrated by a lack of resources at hand to help those in need. “There was a little bit of equipment, when some of the guys arrived we went through some of their bags, not everything that we really needed, but enough there to maybe start the process,” said Kamp.

It was slow going, and rescuers used anything they could get their hands on to help the injured. “They brought in a heavy piece of equipment, like a forklift type deal to help remove some of [the heavier materials]. It took everything we had just to move even one speaker to get to the one of the trapped people,” said Kamp.

That trapped individual was one of the four that died during the collapse. After that, Kamp and the others moved to help other victims, as did a large number of medically trained personnel who were attending the concert that evening. “There was a lot of nurses, EMTs, paramedics that were there watching the concert from all over the region that came down. We all worked well together, we knew what had to be done, and everybody kind of knew their part,” said Kamp.

Kamp doesn’t fault the fair for not having all of the resources needed. According to Kamp, it would have been impractical to have everything they would need on hand, as it is nearly impossible to plan for every contingency.

And with other large scale events coming to Indianapolis in the near future, Kamp is confident if something tragic should happen we would see the kind of support then that we saw Saturday night. “It was nice to see that everybody was listening, did what needed to be done; we didn’t have to explain it. It just got done. I mean there were four to six people at each patient,” said Kamp.