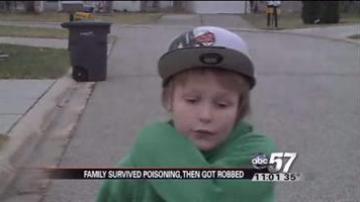 ELKHART, IND. -- An Elkhart family escaped death by mere minutes after a generator in their home gave them carbon monoxide poisoning.  The mother, Sheri Dorrier went to run some errands with her son, but when she returned home, her husband was not breathing.  She called the fire department, but by the time they got there she had passed out as well from carbon monoxide poisoning.

"I remember not feeling good and calling out to her and the next thing i remember i woke up in the ambulance", said Robert Dorrier.

Robert Dorrier says firefighters told him they have never seen carbon monoxide levels this high and that he was five minutes away from dying.  Robert's son Sustin says his dad's survival is the best Christmas present he could ask for.

"I was really really upset..i was wondering if he was going to be okay or not", said Austin Dorrier.

Just as the family received the good news, more bad news came their way.  Someone robbed their house and stole all of their Christmas presents while they were at the hospital.

But now friends are working hard on their behalf.  One posted their story on facebook and the donations are rolling in.  Kevin and Shannon Hanna donated a P.S. 3 and a Wii, so that the kids have presents for Christmas.

"They don't even know us..it was just from a friend of ours putting it on on facebook who thought it was a time for giving and it gives me hope", said Robert Dorrier.

If you would like to donate a gift to the Dorrier family, you can contact April Raymond at