Elkhart firefighters battle a fire at the old Belvedere Inn 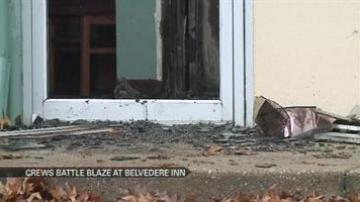 ELKHART, Ind.-- Firefighters worked through the cold to battle a fire at the old Belvedere Inn Sunday morning.

Battalion Chief Wes Johnson said they arrived on the scene just before 8 a.m.

Johnson said, “Our initial crews did a primary search and we found nobody in the structure.”

The hotel was most recently the Ramada Inn, and there was a vacant Bennigans restaurant attached.

Johnson said, “We had fire in two rooms and it did expand into the attic. Battling the blaze initially took a good hour, hour and a half.”

The Elkhart Fire Department had to call in off duty firefighters to give others a break in the cold weather.

Johnson said, “As winter affects us we want to keep the crews fresh. However, we did require every company we had in the city at one point or another here today.”

Johnson said the electricity and gas were still on in the structure, and the property manager had the building inspected just a few weeks ago.

Johnson said, “It’s under the care of a property manager right now. In fact we did a walk through two weeks ago and nobody was in it to our knowledge.”

The cause of the fire is still under investigation.
Share this article: