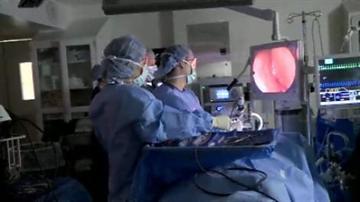 ELKHART COUNTY, Ind. -- Elkhart General Hospital has a new way to treat people with chronic sinus problems. To get the word out, a young girl's surgery was documented live through Twitter. It was a way the hospital could show potential patients how quick and easy the procedure is.

Eight year old Grace Phillips has suffered from constant congestion, sinus infections, and an inability to breathe through her nose.

"Grace's sinus problems started around 12 months of age and by age two she had tubes put in her ears and adenoids removed; and by age three she had a tonsillectomy," said Grace's mom Leanne Phillips.

Her sinus issues remained, prompting her parents to seek a solution.

One option was a traditional sinus surgery.

"A traditional sinus surgery is done with cutting utensils; a little instrument that actually that cuts small amounts of tissue as you go," said Dr. John Gilbert, Otolaryngologist.

While it opens up the air passages, allowing you to breathe, there are drawbacks.

"We just didn't want to put her through that," said Leanne.

No parent would. Luckily, there is another option and Grace had it done.

Because not many people know about this new option, the patient and doctor allowed the surgery to be live-Tweeted on Twitter. It's just one other way social media has been used to share information and show prospective patients how quickly the procedure can be done.

"She's come through surgery beautifully and we are just really looking forward to a new and improved Grace," said Leanne.

"For Grace I would expect her to be up and playing by tomorrow morning for sure," said Dr. Gilbert.