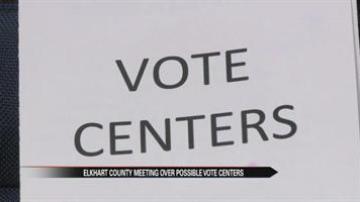 ELKHART COUNTY, Ind. -- In Elkhart County, the election board is considering creating voting centers instead of traditional polling places. If the change is approved, it will be the first county in northern Indiana to make the switch.

Elkhart County estimates it would save $27,000 per election if it adopts vote centers.

In addition to saving money, the process would be easier for voters. They could vote anywhere in the county.

"It gives them the freedom to choose where they want to cast their ballot," said Elkhart County Clerk Wendy Hudson.

Currently, voters must vote at their designated polling location in their precinct.

If the change is made, they would have safeguards so voters couldn't vote twice.

The election board is in the process of making a plan with hopes of reaching a decision soon.

First they must hold public meetings to hear concerns from voters, like the cost of new machines.

It's a move several counties in the state are experimenting with, but Elkhart County could be the first in northern Indiana to adopt the changes

"Reduces the number of people the parties have to recruit to be poll workers, so it benefits on many different levels," said Hudson.

There are several meetings about the vote centers.