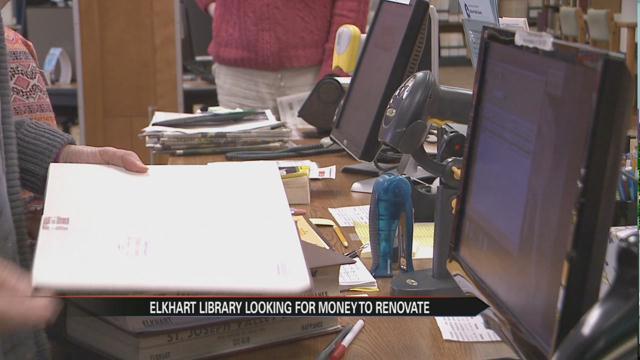 The Elkhart Public Library is one step closer to starting major renovations. The library director says the library needs structural improvements to the library's elevators, restrooms, and meeting rooms.

The library has faced a diminishing budget year after year so it had to ask the city to issue a $1.4 million bond to help with the improvements.

Touring the Elkhart Public Library, it's a spacious building with lots of activity.

But hopping on the elevators you wonder how they have lasted since the building's opening in 1963.

“We've fixed them through the years but they no longer make the parts for elevators this old,” says Marsha Eilers, Assistant Director at the Elkhart Public Library.

Eilers has worked at the Elkhart Public Library since 1979 and says not only are the elevators outdated but they don't meet standards set by the Americans with Disability Act.

“And as the demographic in the county age as they are we will for sure have a bigger demand who need access to all parts of the library,” says Eilers.

Standing in the elevator at the Elkhart Public Library it's hard to fully extend your arms from wall to wall, making it a tight of a squeeze for those who use a wheelchair, walker, or scooter.

Hester Dorsam meets with her knitting club every Tuesday at the Elkhart Public Library and has been doing so for 16 years. She says as she gets older its painful to use the stairs.

“This elevator here is real small I got a bad knee now and going up and down the stairs is kind of painful,” says Dorsam.

Plans to upgrade the elevators take up about half of the bond money but other projects include updating restrooms to meet ADA standards and more conference rooms to fit public groups like the Elkhart knitters.

Eilers says these are all necessary updates that are hard to tackle with a diminishing budget.

“Every May, we find out how much we loose from the circuit breaker property tax caps,” says Eilers.

There are three steps before the bond is issued and the library can start the renovations. The library has already passed step one of meeting with the Elkhart County Council they approved the bond issuance this past Saturday.

Library leaders will meet will meet with Elkhart City Council on May 18th and then have to meet with the county one more time in June. If the bond is issued construction is planned to start in the fall.