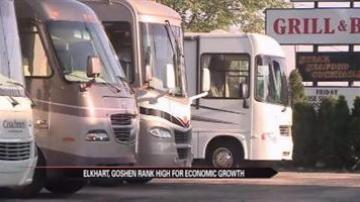 ELKHART, Ind. – 24/7 Wall Street released its’ top ten American cities for job growth and guess who is No. 8 on the list? Elkhart, Indiana.

Chamber of Commerce Vice President Kyle Hannon said he wasn’t surprised, because of all the growth in the RV industry this year.

“We were leading into the recession, but now we are leading out,” said Kyle Hannon.

The city was hit pretty hard by the recession.

“Ouch, it was going to be bad, because of our RV industry here.  When it goes everything around us goes,” said Elkhart resident Cathy Conkey.

Conkey has lived in Elkhart for 25 years and she can vividly remember when the recession hit back in 2008.

She said she is glad Elkhart is getting recognition, but she has not seen the impact yet.

“I think that is great, but I would like to know where,” said Conkey.

Hannon said real gain has been made manufacturing, specifically RVs.

“The RV industry hires a lot of people so how that industry flows, because there are so many employees tied to it, those can be a good indication of what is going on,” said Hannon.

Hannon also said the will of those living in the city helped it get out of the slump.

“It was not if we get out of the recession, it was when,” said Hannon.

Still, Conkey thinks Elkhart has a long way to go.

“It has not changed.  It has become scarier, because it has become more intimate, closer to my family.  They are struggling harder,” said Conkey.

Conkey also said she has been seen hiring signs popping up around town, but the majority of them are for minimum wage jobs.  She said during a tough economy, you just have to take what you can get.