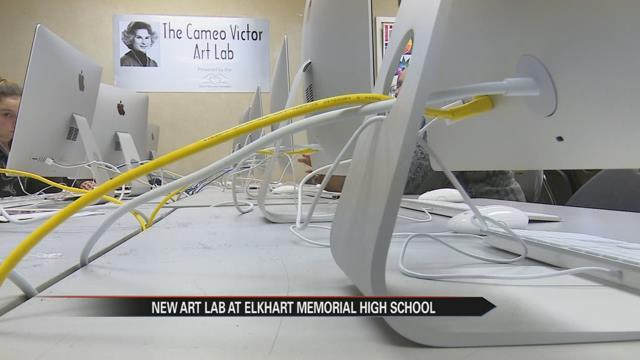 Thanks to one family’s generous donation, Elkhart Memorial High School has a new art lab that honors two artists who painted a place in the community’s hearts.

Elkhart Memorial High School students can now click their way into a future in the art world.

“It’s a really cool donation what they did with the computers,” said junior art student David Garcia.

“It’s something that I’ve been trying to achieve for 18 years. This is my 19th year teaching,” said Elkhart Memorial Art Department Chair, Matthew Hartman.

“We found out that they had hundreds of students signed up for these new courses, like advanced photography , digital design, and they had nine dilapidated, outdated, desktop computers without the proper software to run those classes,” she said.

So, they convinced Cameo Victor’s family to direct the more than $30,000 needed to buy 30 new iMac computers for the art department.

“This would be a dream come true, just for the sheer exposure for children who might understand this way of communicating,” said Cameo Victor’s daughter, Babette Bowling.

“And it’s kind of nice to have things that are new, like were funded, like people actually care about the art students,” said junior art student Sydney Mais.

One art student who will never have the chance to try out the new computers is the art teacher’s son, Braden. He died from cancer earlier this year, at just 14 years old.

“He had a movement in Elkhart, and it was called Braveheart, and people followed his ups and downs and his battle with cancer,” said Molyneaux.

“To see my mom’s picture next to Braden Hartman, somebody who lived their full life, and somebody who didn’t get to do that, but both were brilliant,” said Bowling.

They’re hoping to foster that brilliance in all art students at Elkhart Memorial.

“Kids are really frightened to try new things, but when you put technology in front of them ,it opens up a whole new world, and they are not scared. You know, they want to jump right in. Mr. Hartman, look what I found, look what I can do!” said teacher Matthew Hartman.

“It’s cool to see that I did that off of this. Now it’s…first, it came from a sketch, and then it went to that. So, it’s pretty cool,” said student David Garcia.

Everyone is really excited to see how Elkhart Memorial’s art students seize the opportunity that Cameo’s computers are giving them.