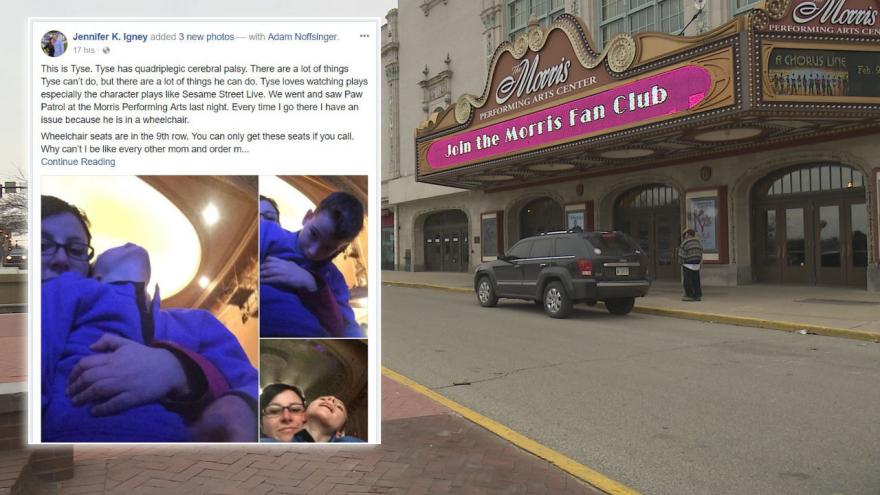 SOUTH BEND, Ind. — a mother in Elkhart is sharing her son’s story in the hopes more public venues will be more mindful of their handicapped patrons.

“He just wanted to go and have a great time and see those characters and watch the show,” she said.

Igney says she and her son made the best of a bad situation Tuesday night.

Her son Tyse has cerebral palsy so she purchased wheelchair accessible seating in advance.

But once they got to the box office, there was some confusion and it appeared there wasn’t a wheelchair accessible spot available.

This caused them to not only miss the first half of the show, but they say, they were told the only seats available required them to get rid of his chair.

“I said he has to sit on my lap, he’s quadriplegic he doesn’t have that balance,” she said.

A map of the theater’s seating arrangement shows there are 100 wheelchair accessible seats.

“While we failed to meet the patrons’ basic needs of service, we have procedures and accessibility features in place that exceed all ordinances and best practices to make the Morris accessible and comfortable for everyone.  This was an isolated case of substandard customer service.”

Igney says she hopes her story becomes a teachable moment.

The Morris has refunded Igney’s purchase, offered complementary tickets and merchandise from the show.