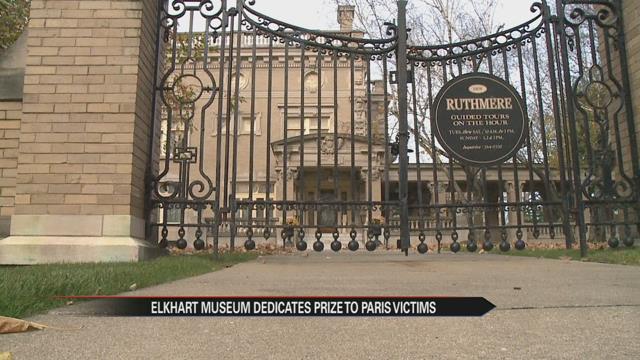 The Ruthmere Museum in Elkhart is giving away a trip to Paris but since last week’s terror attacks, the giveaway has taken on a whole new meaning.

“We want to stand united with the French people at this time and show our support by concluding the year of French culture with the drawing of this trip,” Ruthmere Museum Executive Director Bill Firstenberger said.

Firstenberger and his team have spent the year celebrating the historic mansion’s many French features.

“2015 has been the year of French culture [at the museum],” Firstenberger said.

The museum’s French architecture, French interior design and a rare collection of sculptures by French artist Auguste Rodin has all been highlighted throughout the year.

But it’s the end-of-year prize the team at Ruthmere is giving out that’s become especially meaningful.

“We wanted to make a bold statement and say, you know, we’ve been doing this Paris trip promotion all year long,” Firstenberger said.

He’s talking about an all-expenses-paid trip to Paris that is up for grabs for one of Ruthmere’s annual members.

The winner will be chosen on New Year’s Eve at a cocktail party at the museum and Firstenberger is hoping it will symbolize Ruthmere’s support for the victims in France because he’s not changing the destination.

“We’re gonna stand by that,” Firstenberger said. “We’re gonna stick with the French people in their time of crisis, just like they did with us through 9/11.”

Though the winner of the prize can change where they’d like to go, Firstenberger is hoping Paris is where they’ll land.

“If the trip winner decides to go to Paris, those dollars are gonna go to support that country,” Firstenberger said.

You can still sign up to become a member at the Ruthmere Museum and qualify for the trip to Paris.