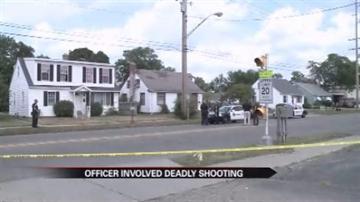 ELKHART, Ind. -- The three officers who shot at and killed 27-year-old Jaime Benavidez on September 1, 2013 used reasonable force, according to the Elkhart County Prosecuting Attorney.

On September 1, 9-1-1 received a call from a resident in the 300 block of West Lusher Avenue that there were two suspicious males in the area and one had a handgun.

A few minutes later, dispatch received another call from someone in the 300 block of West Hubbard indicating there were two males who were trying to force themselves into a house and one had a handgun.

Two Elkhart Police officers arrived at the Hubbard Avenue scene and one person ran from the house in a southwest direction ignoring the officer's demands to stop.

A second person, Jaime Benavidez, exited the home carrying a black handgun. He refused to drop the gun when police ordered him to do so.

An officer was unable to disarm Benavidez because a woman was standing between Benavidez and the officer.

Benavidez eventually ended up at 328 West Lusher where two people were attempting to go into the residence. Benavidez tried to force his way inside, but the residents were able to get the door closed and locked.

Three other officers, Sgt. Karl Miller, Cpl. Bruce Anglemeyer, and Cpl. James Ballard, were in different positions at 328 West Lusher and pointed their weapons at Benavidez. They ordered him to drop his gun and lie on the ground.

Witnesses said Benavidez raised his gun toward the officers and all three fired at Benavidez until he dropped his gun and dropped to the ground.

Elkhart Police requested an ambulance and secured the scene.

The second suspect was located and taken into custody. He had been under supervision of the Elkhart County Probation Department and was on a weekend pass. He has been charged with resisting law enforcement in juvenile court.

The Indiana State Police conducted an investigation and sent all the materials to the Office of the Prosecuting Attorney.

The case was reviewed and the Office of the Prosecuting Attorney determined Benavidez, who was under the influence of a controlled substance and alcohol during the September 1 incident and raised his gun in a threatening manner, threatened the safety and security of the residents of Elkhart.

The Office of the Prosecuting Attorney says the evidence is clear that the three officers used reasonable force under the circumstances and did not violate Indiana law.