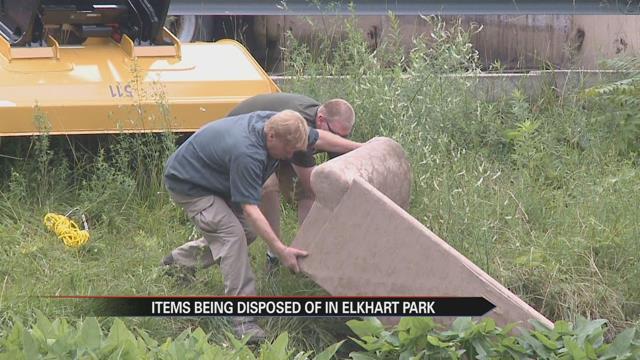 Sofas, shopping carts, and benches sound like items at a garage sale but it is what is being found in the water of one park in Elkhart.

Candy wrappers on the grass and pop bottles in the water aren’t the prettiest scene for a park. But they don’t even compare to the larger items being dumped at High Dive Park.

"Benches in the ponds golf carts park benches a lot of trash," says Jyrron Cooper, Building and Grounds Employee. “A lot of sofas.”

Cooper is with the Building and Grounds Department and says he and his crew are used to picking up bulky and obnoxious items.

“At least three or four times a month,” says Cooper.

Thursday the crew was removing a sofa dumped along the water and a shopping cart submerged in the pond.

“To me this just doesn’t look friendly,” says Melissa Marquez, an Elkhart resident.

Marquez is a young mother who wants a park that her two-year-old son can enjoy.

"I would like it to look like a family function. A safe place to bring your family,” says Marquez.

Swimming is allowed in the creek at High Dive but some say all the trash will cause health issues.

"My dad he went in there once for five minutes to save somebody and he got sick,” says Caleigh Mace, of Elkhart.

The building and grounds department is helpless to the scum in the water but say they do what they can.

“We get it done so we can back to our normal job but it’s very frustrating,” says Cooper.

Karin Frey the Superintendent for the Parks and Recreation Department says fines for dumping are upward of $300.

Frey adds the department needs the community to be their eyes and report any dumping they see to the Elkhart Police Department.