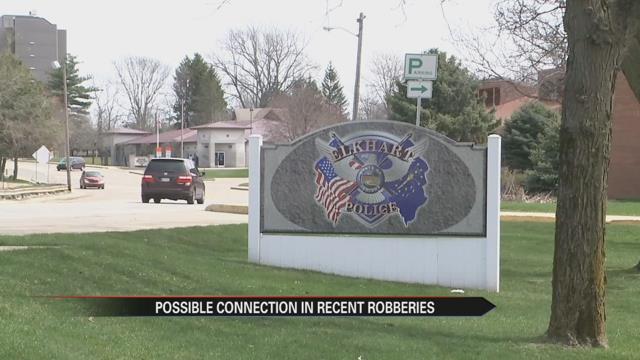 Elkhart Police believe two crimes that happened over the weekend are connected. There were two home invasions, both committed by three men, where the residents were tied up.

“Two invasion style robberies where all three suspects had weapons, all three of them displayed those weapons- in one incident somebody was shot,” says Sergeant Chris Snyder of the Elkhart Police Department.

Early Sunday on Hiawatha Drive a home was broken into by three masked suspects. One woman was tied up and a man who lived at the home was shot in the neck.

“The fact that they continue to do what they were there for, the robbery, after they shot somebody; in my mind I would say they are three very dangerous individuals,” Sergeant Snyder said.

That wasn't the only home invasion that weekend.

Police say about 24 hours before the incident on Hiawatha Drive, seven people were held up at gunpoint at a home near Bower Street and West Boulevard.
“There were a lot of similarities and some things that led us to believe that they are possibly going to be connected,” says Snyder.

In both cases money and electronics were taken and victims were tied up. All three suspects have been described as black males who were carrying guns.
We believe they were targeted but we don’t want them to expound on that and have it be where they are just doing random burglaries or robberies like this,” says Snyder.

Neighbors in the area agree. Regardless of the reason for the home invasion the community needs to step up for safer streets.

“We really need to be more careful about who comes into our neighborhood. The incident that happened is very frightening and it feels like our kids aren’t safe in the streets anymore,” says Edith Ortiz of Elkhart.

If you have any information on the home invasions, contact the Elkhart Police Department or Crime Stoppers at 288-STOP.