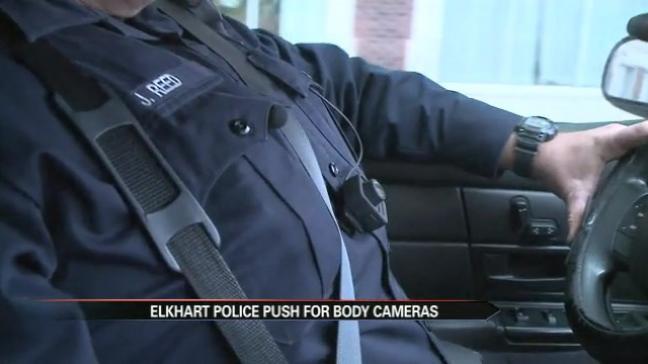 The Elkhart City Police Department is looking into purchasing body cameras for their officers. So far they've decided they like a system that has the ability to sync with a dash camera too. This dual upgrade would cost $5,200 for each officer, and it would total over $300,000 if they decide to make the investment.

Right now one officer is trying out a cheaper body camera that costs close to $800. According to Sergeant Chris Snyder it would cost around $40,000 to give all their officers the cheaper Digital Ally body camera.

Chris Snyder said, “Things happen in the heat of the moment where the recording system we have now doesn't get turned on, if you go to jump out on somebody who is running from you might not have time to turn your lights on which activates the camera.”

Corporal Jason Reed showed us the body cam video he took this month while searching for a suspect. Reed said this type of video can help evidence collectors.

Cpl. Jason Reed said, “You go to calls and it's not uncommon to have 4-5 people out there with video cameras off their regular cell phones so being on video doesn't bother me. I'm not hiding anything; in fact I think it helps me, if somebody makes an allegation of wrong doing we can pull that up.”

Reed said, “But when you put the camera on somebody and they're falling down drunk, slurring their words, or they're disheveled, you can see that on video versus trying to describe that on paper.”

Snyder said if the department chooses to budget for these cameras, he thinks it would help with transparency and the public's trust.

After Reed tries out the camera, it will be handed off to a crime scene investigator and then an officer who works a night shift.

Chris Snyder said, “I can go back and review this on the camera and pick up on something that maybe we missed. Maybe it's a bad guy dropping a knife, or a bag of narcotics or something like that. and we catch it on the camera when maybe we didn't catch it with our eye because we are focused on something else.”

If this trial is successful, and the new cameras fit into their budget, Snyder said the public could see multiple officers wearing body cameras in the next few months.