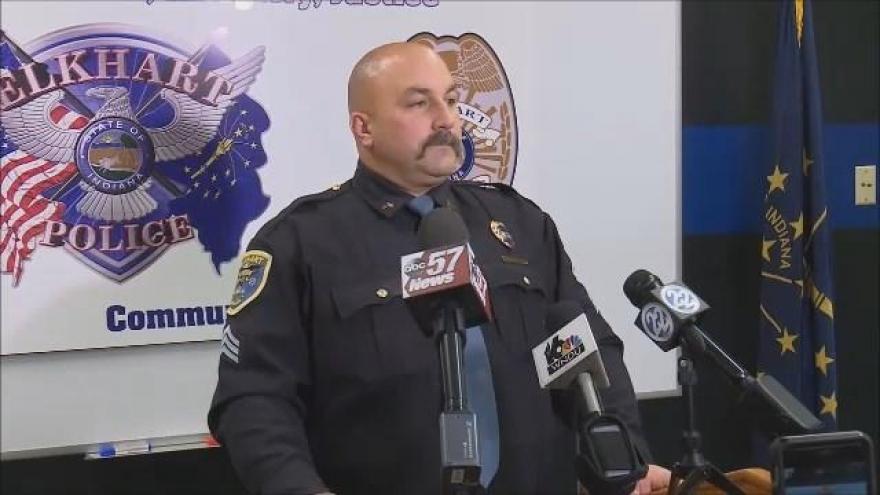 The Elkhart Police Department held a press conference Tuesday morning about the shooting on DeCamp Avenue on Sunday December 4.

During the press conference, Mayor Tim Neese said he was grateful for the assistance of the Indiana State Police, Goshen Police and Elkhart County Sheriff's Department who are all involved in the investigation.

Both officers involved, Nathan Lanzen and Leonard Dolshenko, are on administrative leave, which is standard protocol.

According to ISP, one of the officers did have a body camera, but it had stopped working during his shift. They do not think it will make a difference in the investigation.

Police said they do not believe the initial burglary call was related to the shooting.

"We have nothing to indicate that race had anything to do with this," Elkhart Police Sergeant Chris Snyder said in response to a question from a member of the press.

At 3:39 a.m. Sunday morning, Elkhart Police were called to the 500 block of Capitol Boulevard in regards to a burglary.

When they arrived to the area, they heard the sound of gunfire coming from the 1800 block of DeCamp Avenue, police said.

In an encounter with individuals leaving the DeCamp Avenue scene, officers Lanzen and Dolshenko discharged their weapons.

Four people were shot, one of those died from their injuries.

Jazzlyn Crase, 22, was shot and was taken to the hospital with non-life threatening injuries.

Delano Johnson, 24, was shot and taken to the hospital with non-life threatening injuries.

Shawn Scott, 21, was shot and taken to the hospital with non-life threatening injuries.

Many neighbors told ABC57 that one of the homes on DeCamp, was having a party that led to an argument.  ABC57 spoke with the woman who lives at the home, who said she did have a party Saturday evening, but it was her and her friend's birthday party.

But she says the shooting victims weren't invited. She believes they thought there was an after party, after they had all been at McKee's in Goshen. The sports bar is about a 17 minute drive to Decamp Avenue.

The woman says she was inside her house doing karaoke, when shots were fired outside.  She told ABC57 she does not know what happened and who the victims are.

The investigation is still ongoing.  "We like to look at what led up to [the incident]," Sgt. Snyder said. "What happened earlier that led to shots being fired, which then led to our police officers responding to those shots being fired, and then what led them to have to take the actions that they took."