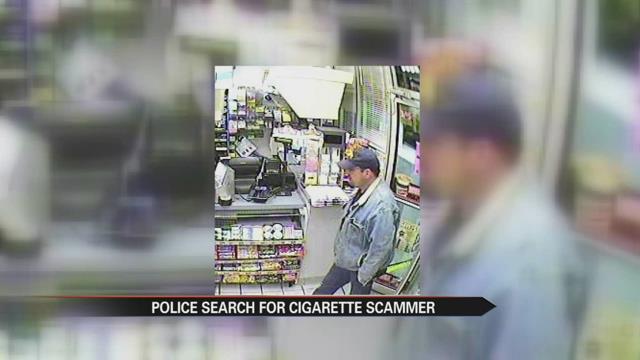 Employees at gas stations in Elkhart say it is not something that scares them but cartons cost upward of $60 and over time this type of loss is no joke.

On old U.S. 20 the prices of cigarettes can be seen from the street but one man in Elkhart pays no mind to the signs.

“It’s relatively simple. The guy goes in and asks for a carton of cigarettes when the clerk puts them down on the counter he takes the cigarettes and walks out of the store with them,” says Sergeant Chris Snyder with the Elkhart Police Department.

A little over a week ago multiple gas stations were hit by a cigarette scammer.

“But he did it twice on the same day so that kind of drew our attention to those,” says Snyder.

First the man hit the 7-11 on South Nappanee Street a little before 3 a.m. on October 10th. Then around 9 a.m. that same Saturday morning he struck the Speedway on old U.S. 20 where an employee says he recognized the unarmed man in the baseball cap.

“There was no weapon or anything like that no one was seriously injured,” says Snyder.

The employee who talked to ABC57 off camera says the suspect isn’t threatening but annoying. That clerk says has been stealing cartons that run up to $60 for the past few years.

“We are looking at him right now just as a simple theft just trying to figure out who this guy is so we can get him in and get him interviewed,” says Snyder.

Police say the suspect drove away from both gas stations in a gold or tan F150 crew cab truck with wearing on the sidewall of the passenger front tire. Even though the incident is described as a simple theft the suspect is facing felony charges.