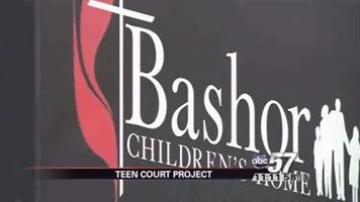 SOUTH BEND, Ind. -- It takes thousands of dollars to try a teen in the juvenile justice system. Today the Elkhart County Prosecutor’s office put money into a different kind of court system, The Bashor homes teen court system. Teen court is a diversion program in which one time teen offenders are judged by a jury of their volunteer peers.

"It's lack of a father figure or lack of support at home. A large portion of our cases come from single parent homes," said Manning.

But he says the cycle of the teen court program helps them understand right from wrong. The offenders are not only judged by a group of their peers. As part of their diversion, they must judge another case as well.

Manning says this helps the offender understand the justice system as well and he says it's where the real transformation begins.

"She did not have respect for the criminal justice system or the process at all. She went through the program and when she became a juror she was able to help other kids," said Manning.